This post isn’t so much about programming as much about an earlier post about Division By Zero. So, I thought, if the reciprocal operation to 1 / 0, 0 / 1, is valid, then maybe division by zero can be postponed and considered later. Similar to the imaginary concept, i or sqrt(-1).

Using just fraction concepts I managed to accomplish a lot of progress and, not being a mathematician, I don’t know how much merit there is to it, but here we go.

OK, so now something that I found immediately useful to do with Q and seems to make sense, furthermore this is what lead me to think up Q. 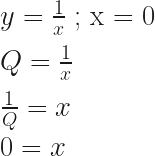 how does this resolve?

What this leads to is another assumption: algebraically, the same way Q can be considered for later, so then, can Zero be considered later. 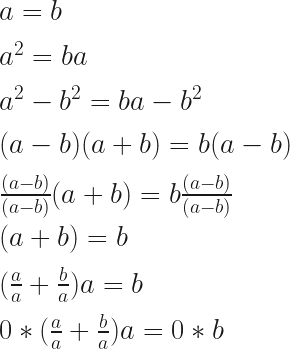 Now – I realize – if I had distributed the zero to the a instead, the answer would have come out incorrect.

So, I’ve been messing around with this concept using my limited math skills, and it seems like sometimes Q works, and sometimes, it doesn’t work. It’s like sometimes there’s a good solution and an infinity of wrong ones, or the opposite, or some mix of random, maybe. I just don’t know. At the end of the day, sometimes it works, so maybe there is merit.

What I’ve concluded is that with this concept, a consequence, is that it’s possible to basically make anything equal anything, and that seems like an odd thing to consider.

One thought on “Division By Zero Exploration”